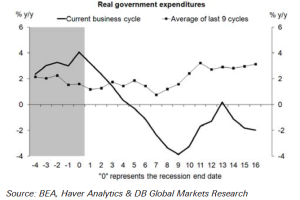 Martin Sumichrast describes that there has been a period of austerity for the past 4 years. It’s a fundamental response to a decade long financial boom which was based on irrational credit policies.

In other words Martin says, “the hangover always hurts. The goverment ramped up spending, then got the carpet pulled out from under itself. Austerity will taper as the economy rebounds, although very slowly.”

America Has Had More Austerity Than You Ever Would Have Imagined